Sunrise Valley Elementary School was the sixth public school built in the Reston community. Our school was established in September 1978, but during that first year classes were held at South Lakes High School because our school building was still under construction.

During our first year, Sunrise Valley operated out of 14 classrooms at South Lakes High School, in a wing of the building closed to high school students. The students ate in the same lunch room, but at different times. Enrollment during the first year peaked at 335 students.

Did you know that Sunrise Valley was the first elementary school in Fairfax County to have triangular-shaped classrooms? The classrooms, built on the open classroom pod-model, originally did not have doors. They were enclosed during a subsequent renovation. 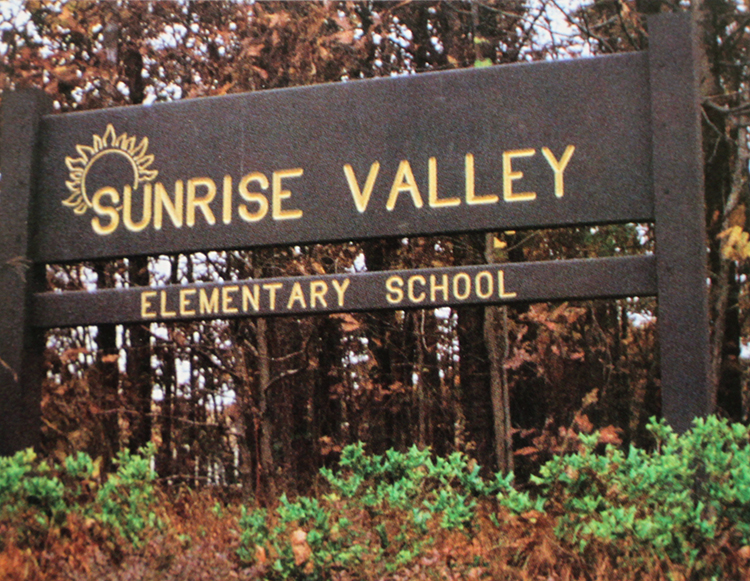 Sunrise Valley was the first Gifted and Talented Center (GT) in the Reston area. Prior to that time, GT students from Reston were bused to Kent Gardens and Haycock elementary schools in McLean. The GT program was the forerunner of today’s Advanced Academic Programs (AAP).

Shortly after Sunrise Valley Elementary School opened the Fairfax County School Board authorized the construction of a ten-classroom “relocatable addition” to our school due to continued student enrollment growth in Reston. The addition was constructed in the fall of 1980 by Atlantic International Corporation and Ashley Homes, Inc., at a cost of $439,077.

In the fall of 2013, the School Board awarded the contract for the building-wide renewal of Sunrise Valley Elementary School to the Henley Construction Company. The relocatable addition was removed during this renovation, and a new classroom wing and extended driveway were constructed in its place.

A Community of Learners

In 1994, Sunrise Valley Elementary School entered into a partnership with Marymount University to create the Professional Development Academy. The academy program was created to provide Marymount students, who were working toward their master’s degrees in education, with teaching internships at Sunrise Valley.

The intern-teachers learned classroom management skills, how to work with students one-on-one and in small groups, how to work with parents, and how to deliver classroom instruction. Our students, in turn, learned from them, creating a community of learners at Sunrise Valley.

Did you know that Sunrise Valley was the first elementary school in Fairfax County to have a telephone in every classroom? The phones were installed in the summer of 1995, thanks to the generous support of our then business partner AT&T and Sunrise Valley’s PTA. 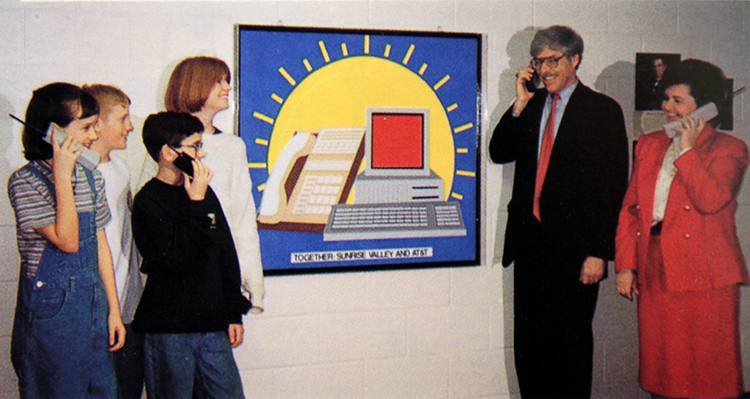 What’s in a Name?

During design and construction, Sunrise Valley Elementary School was referred to as the Carper Site and as Reston Elementary School #6. Our school was officially given its name by the Fairfax County School Board in July 1978. Learn about the origin of the name Sunrise Valley in this video produced for the Fairfax County Public Schools cable television channel Red Apple 21.

When she passed away in November 2000, Ella Miller was a local celebrity who lived to be 111 years old, a true supercentenarian (she was presumed 119 at the time of her death). (Sources: https://grg.org; https://www.washingtonpost.com)

Ms. Miller was once honored by President George H. W. Bush at a ceremony in the White House Rose Garden for being one of the oldest volunteers in Northern Virginia. In 1995, she met with President Bill Clinton in the Oval Office at the White House and presented him with a t-shirt from Sunrise Valley Elementary School.

Mrs. Miller was very special to the students at Sunrise Valley. Every year she would celebrate her birthday with us. Our gifts were simple, made out of cardboard, scrawled with our messages and pasted with our love. She came not only to celebrate her birthday, but to celebrate life. Her strong spirit inspired us. We hope that we inspired her, too. She was amazed by all that we could accomplish, and we were amazed by all that she had done. This was our opportunity to touch the past. It was her gift to touch the future. That is how we will always remember Mrs. Miller. May she rest in peace.
~ Written by Mrs. Haggerty’s 6th Grade Class, December 2000

In May 1999, the Fairfax County School Board named Sunrise Valley Elementary School’s library in honor of Dr. MaryAnn Chung, our school’s third principal. Dr. Chung led Sunrise Valley from 1986 to 1998, and was twice nominated for the FCPS Principal of the Year Award, in 1992 and 1994, respectively. This lasting tribute to Dr. Chung was initiated at the request of our school’s faculty and community members after her retirement. The School Board’s naming resolution praised Dr. Chung for her knowledge, exceptional leadership skills, and creativity; for her encouragement to students to excel in their academic studies and to be outstanding citizens; and for her service as colleague, advisor, and mentor to students and faculty members both at Sunrise Valley and at other Fairfax County schools.

For thousands of years, Fairfax County was used as hunting territory by the native peoples of Virginia. At the time of European contact in the early 1600s, eastern Fairfax County, along the Potomac River, was the home of the Taux people, also known as the Doeg or Dogue. The Taux, and another nomadic tribe known as the Manahoac, frequently used western Fairfax County as hunting territory. In March 1980, Sunrise Valley Elementary School fourth grader Billy Ward and his friends were looking for interesting rocks on the playground during recess when Billy stumbled upon a rock that he said was “shaped like a fish.” Billy showed the rock to his teacher, Mr. Henry Friedl, who informed Billy that the rock was an arrowhead fashioned out of quartz. The arrowhead was authenticated as a genuine American Indian artifact by the Smithsonian Institution, but its exact age was unknown. The arrowhead was likely churned up during the construction of our school, but no one noticed it before Billy happened along on that fateful day.